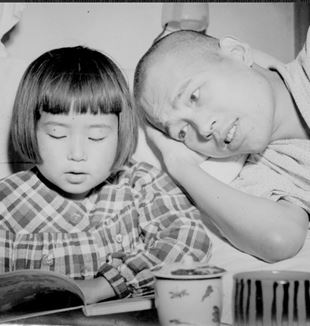 The Sydney CL community had the privilege to meet and spend a day with Father Paul Glynn, the author, in Hunters Hill, a historic suburb overlooking Sydney’s spectacular harbour. Father Glynn is a Marist priest who served as a missionary in Japan for twenty-five years and has written five books including A Song for Nagasaki and Healing Fire of Christ.

The appeal and the simplicity of a life dedicated to Christ was apparent to everyone, in a day in which we experienced Holy Mass, an intense discussion on current life experiences and a pleasant lunch at the pub.

The highlight of the day was listening to Father Glynn introducing his book, A Song for Nagasaki.

The book is centred on the story of Takashi Nagai, a physician specializing in radiology and a pioneer in radiology research, who converted to the Catholic Faith, and his life after the release of the atomic bomb on Nagasaki, Japan, in 1945.

The tragedy of the American bomb that in an instant killed tens of thousands people, while thousands more were injured and poisoned, would have broken any man, but Takashi lived out his amazing life by bringing both physical and spiritual healing to the victims, despite his own injuries and the loss of his wife. His faith gave him peace and how he lived gave faith and peace to others.

His conversion is particularly interesting. While Takashi Nagai was a top grade medical student, he was an atheist who passionately believed that science held the key to the future of the human race. Additionally, his love for his Country led him to believe that the spirit of Japan would improve his nation's future. His change came from the words his mother pronounced before her death: "Your mother now takes leave in death, but her living spirit will be beside her little one, Takashi", as suddenly the reality of the spirit struck him.

The reading of the Catholic poet Blaise Pascal's Pensées further consolidated his conversion. Nagai became a highly revered man, considered a saint by many Japanese people. In the final years of his life, despite being gravely ill with leukemia, he wrote powerful books that became best-sellers in Japan. His most famous book, The Bells of Nagasaki resonates deeply with the suffering of the Japanese people as it explores the Christian message of love and forgiveness.

A Song for Nagasaki